My little brother graduated high school this year, so as is tradition, my parents suggested he have a little graduation party. Due to the world of facebook and the ridiculous amount of friends my brother has- three hundred people ended up being invited. Woops.

The plan for the party had been to serve ice cream sundaes-  cheap and easy enough! It was my job, as the only one already on summer break, to prepare the food. That was no big deal when the party was going to be 50 people- slightly bigger deal for 300. We decided to make brownies for the ice cream sundaes, and I really wanted to make homemade brownies, however, because I felt like I was cooking for an army (an army of teenage boys!) I ended up buying about a dozen box brownie sets for the sake of time. About halfway through the brownie box sets however, I got so bored and tired of mediocre brownies that I abandoned the remaining brownie boxes in the pantry and pulled this recipe out!  The result was a perfect and delicious brownie that far surpassed the box brownies in taste, nutritional value, and texture.

The only other time I’ve had homemade brownies this summer was at a cookout with some friends. Someone brought homemade brownies that were being uneaten because we all decided to make s’mores. (Here’s where my moment of genius began!) In order to maximize my chocolate intake, always a goal, I replaced the classic piece of Hershey’s chocolate with a thick, delicious, moist brownie. Roast your marshmallow as desired, then slide it on top of your brownie, finish with two graham crackers, and you have the most fantastic s’more you’ve ever had in your life.

Moral of the story- whether you’re placing your brownie in a s’more or under a pile of delicious ice cream- homemade is definitely better. Trust me on this, your tummy can thank me later.

3 thoughts on “Double Chocolate Chip Brownies (and a brownie s’more!)” 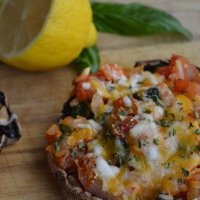